If you have ever taken a walk along a sandy beach, you probably observed that there is a place quite near the water’s edge where the ground is dry enough and firm enough to easily walk on. In contrast, if you have walked along the edge of a lake or pond where the surrounding soil was fine-textured, you probably found that the ground near the water’s edge was wet and muddy. The differences you experienced in those two cases can be partly explained by the differing capabilities of coarse- and fine-textured soils to retain, or store, water. These capabilities are described by a relationship called the soil water retention curve. The soil water retention curve is the relationship between soil water content and matric potential. Understanding this relationship is crucial to understanding processes such as soil water storage, water flow, and plant water uptake.

Another fundamental characteristic of soil water retention curves is that coarse-textured soils retain less water than fine textured soils at the same matric potential. Consider the substantial differences in the curves for the sand (L-soil), sandy loam (Royal), and loam (Rothamsted) textured soils in Fig. 3‑6. The sand exhibits a much lower saturated water content than the loam, in this case 0.18 cm3 cm-3 versus 0.51 cm3 cm-3. The sand also has a higher (less negative) air-entry potential than the loam, -32 cm versus -128 cm. The water retention for the medium-textured sandy loam soil is intermediate between those of the other two soils. Throughout the subsequent chapters, one common theme will be how these substantial differences in water retention between different soil textures dramatically influence water movement, plant growth, and related processes in both managed and natural ecosystems.

The soil water retention curve can also be influenced by whether the soil is undergoing wetting (sorption) or drying (desorption). When the soil water retention curve differs between wetting and drying, that phenomenon is called hysteresis. This phenomenon has a number of important effects on soil water dynamics. For example, hysteresis in the water retention curve can increase the amount of water that is stored near the soil surface after an infiltration and drainage event [21]. Hysteresis can also slow the rate of solute leaching in soil under natural rainfall conditions with greater effects in coarse-textured than fine-textured soils [22]. In subsequent chapters, we will further consider the effects of hysteresis. For now, we will examine its nature and causes.

Hysteresis in the soil water retention curve has multiple possible causes including: air entrapment, contact angle hysteresis, and the “ink bottle” effect. Air-entrapment occurs when a partially-drained soil is rewetted and small pockets of air become trapped in the interior pore spaces. This entrapped air cannot easily be removed, even if the soil is submerged underwater. As a result, higher water contents occur along the primary drainage curve from a fully saturated condition than those that occur during subsequent re-wetting (e.g. Fig. 3‑8). Due to air-entrapment during re-wetting, the soil water content approaches a maximum value below the true saturated water content and this lower value is sometimes called the satiated water content. The image in Fig. 3‑9 was generated by X-ray computed tomography and shows air-entrapment in the complex macropore network of a satiated soil column [24]. Soil chemical, physical, and biological processes can alter the amount and distribution of entrapped air over time, so the impact of air-entrapment on soil water retention can change with each subsequent re-wetting cycle.

A second potential cause of hysteresis in the soil water retention curve is a phenomenon known as contact angle hysteresis. The contact angle is the angle at which a liquid-gas interface meets a solid surface (Fig. 3‑10). In our context, this means the angle at which the interface between the soil solution and the soil gas phase contacts the soil solids. Mineral soils often have contact angles <90° and are classified as hydrophilic, i.e. having affinity for water. Organic soils and mineral soils in which much of the surface area becomes covered with organic coatings can have contact angles >90°, making them hydrophobic, i.e. tending to repel water.

A third potential cause for hysteresis is the ink bottle effect, which refers to the way in which drainage from a relatively large cavity, such as the body of an old-fashioned ink bottle, can be restricted if the fluid must drain through a relatively narrow opening, such as the neck of an inverted ink bottle. The analogy is somewhat helpful, but to better understand how this phenomenon influences soil water retention, we need to understand an important related phenomenon called capillary rise. Capillary rise is the rise of liquid against the force of gravity due to the upward force produced by the attraction of the liquid molecules to a solid surface and to each other.

When you insert a small diameter tube, or capillary, into a fluid, such as water, the surface of the fluid inside the capillary may rise above that of the surrounding fluid, and the height (h) of this capillary rise is described by:

In Fig. 3‑11, two capillary tubes have been inserted into water. The height of the resulting capillary rise was greater for the uniformly narrow tube on the right than for the non-uniform tube on the left. During this filling or wetting phase, capillary rise could only raise water to the bottom of the tube section with the enlarged diameter. If instead both tubes had drained from an initially water filled condition, then the enlarged section would have remained water-filled and height of water in both tubes would have been equal. Thus, for capillary tubes or soil pores with non-uniform radii, that non-uniformity can cause hysteresis in the water retention curve [25].

Because of the complexity of soil pore networks, we are currently unable to theoretically predict soil water retention curves from first principles, although progress has been made and is being made toward that goal [26, 27]. Until that goal is achieved, we will continue to determine soil water retention curves primarily by empirical methods, i.e. methods based on measurements and experience rather than theory or logical reasoning. Measurements of soil water retention are typically, but not always, performed in the laboratory with different methods being suitable for different portions of the possible range in soil matric potential. Near saturation, intact soil samples should be used because the soil structure and inter-aggregate pores can strongly influence water retention. At matric potentials below approximately –15 kPa, the effects of soil structure on water retention appear to be negligible [28] and smaller homogenized soil samples are typically used.

where θr is the residual water content, which is conceptually the water content below which liquid water flow in the soil is no longer possible, ψe is the air-entry potential, and λ is a number related to the pore size distribution of the soil. Larger values of l indicate more uniformly-sized pores, while small values indicate a wide distribution of pore sizes are present.

A slightly simpler water retention function that is more convenient to use when performing calculations by hand was developed by Campbell [33] and is defined by:

where again b is a parameter related to the pore size distribution. The Campbell water retention function does not include a residual water content.

A more flexible and more widely-used water retention function was developed later by van Genuchten [34]. That function is defined by:

where α is a parameter that is inversely related to the air-entry potential, n is a pore size distribution index similar to λ, and m is a parameter often defined by m = 1 – 1/n.

The most accurate way to estimate the parameters needed for these water retention functions is to obtain measurements of soil water retention across a broad range of matric potentials and then to adjust the parameters to achieve the best possible agreement with the measured values. Measured water retention curves for a loamy sand and a silt loam soil are shown in Fig. 3‑13 along with best-fits of the Brooks and Corey, Campbell, and van Genuchten water retention functions. All three functions fit the data reasonably, with the primary difference in this case being the sharp drop in water content at the air-entry potential predicted by the Brooks and Corey and the Campbell functions. The optimized parameters for each function are listed in Table 3‑1 along with the root mean square error (RMSE), which is a measure of the error in the water content values estimated using the fitted function. For these two soils, all three functions fit the measured data well, but the van Genuchten function has the lowest RMSE.

If you do not have measurements of soil water retention for a particular soil, you can get a general idea of the shape of the water retention curve simply by knowing the soil textural class. Table 3‑2 provides estimates of the parameters for the Brooks and Corey, van Genuchten, and Campbell water retention functions based on

Table 3‑1. Best fit parameters for the Brooks and Corey, Campbell, and van Genuchten water retention functions for samples of Tifton sandy loam and Waukegan silt loam. The root mean square error (RMSE) is also shown to indicate the quality of the fit.

soil textural class alone. This table is one simple type of pedotransfer function, a statistical tool for estimating unknown soil properties from known soil properties. The values in this table are suitable for educational purposes and general approximations of soil water retention behavior but not for many research or design purposes. For more reliable parameter estimates, you can use more complex and more accurate pedotransfer functions if you know additional soil properties such as percent sand, silt, and clay or bulk density or if you have one or more measurements of soil water retention available [35-37].

Table 3‑2. Average parameters for the Brooks and Corey, van Genuchten, and Campbell soil water retention functions by USDA soil textural class. The residual water content (qr), saturated water content (qs), α, and n values were based on Schaap et al. (2001), the air-entry potential (ψe) and λ values were taken from Rawls et al. (1982), and the b values were taken from Rawls et al. (1992). Variables followed by a * are the back-transformed log mean for the textural class. 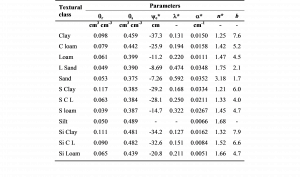 Rain or Shine by Tyson Oschner is licensed under a Creative Commons Attribution 4.0 International License, except where otherwise noted.