As we saw in Fig. 11‑3, the process of transpiration is inextricably linked to the process of carbon assimilation through photosynthesis. Thus, transpiration is a critical link between three of the Earth’s most important cycles or balances, the soil water balance, the surface energy balance, and the atmospheric carbon balance. A great deal of research attention and even public interest has been focused on one aspect of that linkage—the water use efficiency of plants. Water use efficiency is an important concept that can be easily misunderstood and overemphasized.

Plant water use efficiency (WUE) is the ratio of carbon or biomass accumulation to water use or supply during a given time span. One reason that WUE is easily misunderstood is the wide variety of ways in which it can be defined. The accumulation can be expressed in terms of:

The water consumed can be expressed in terms of:

And, the time period of interest can be:

The factors controlling water use efficiency in plants are relatively well-understood, and there appears to be little scope for altering water use efficiency at a fundamental level [5]. Stomates are not selective. When they open to let carbon dioxide in, they necessarily let water vapor out (Fig. 11‑3). The ratio of carbon in to water out depends primarily on the size of the respective gradients in gas concentrations. The carbon dioxide flow into the leaf is driven by the difference between carbon dioxide concentration in the atmosphere and that inside the leaf. The flow of water vapor out of the leaf is driven by the difference between the water vapor concentration inside the leaf and that in the atmosphere. Thus, the WUE expressed as the ratio of carbon assimilated (A) to transpiration (T) for a given instant (i) at the leaf-level (l) is approximately:

where c is a constant that depends on the ratio of the internal and external carbon dioxide concentrations, Pa is the partial pressure of carbon dioxide in the atmosphere, e*l is the saturation vapor pressure for water vapor at the temperature of the leaf, and e is the vapor pressure of water in the atmosphere [5]. An interactive graph to illustrate the relationships between e*l and e as affected by temperature and relative humidity is available here.

The primary possibilities for improving water use efficiency at the leaf level are indicated in Eq. 11-4. The constant c has a value of approximately 0.3-0.4 for C3 plants and 0.7 for C4 plants. This means that crop water use efficiency can be increased by using more C4 crops and fewer C3 crops. C3 plants account for about 85% of all plant species, including major crops like wheat, rice, and soybean. These plants have relatively low water use efficiency in part because in these plants the carbon-fixing enzyme rubisco is exposed to relatively low internal carbon dioxide concentrations, thus its carbon-fixation is relatively inefficient. C4 plants account for only about 3% of plant species, including corn, sorghum, and sugarcane. These plants have a special cells that ensure rubisco is exposed to higher internal concentrations of carbon dioxide, thereby enhancing carbon fixation efficiency. As a result, C4 plants have substantially higher water use efficiency than C3 plants. Plants, like pineapple, that use the crassulacean acid metabolism (CAM) photosynthetic pathway achieve high water use efficiency by opening their stomates at night. A helpful comparison of the C3, C4, and CAM pathways is available here.

Table 11‑1. Relative increase in water use efficiency (WUE) of field-grown crops with CO2 enrichment above the ambient CO2 concentration. Crops were well-watered unless noted. Adapted from Polley (2002) 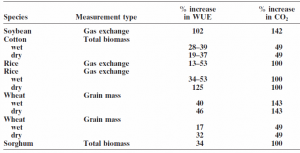 The third possibility for improving water-use efficiency is reflected, not only in Eq. 11-4, but also in Fig. 11‑1. When plant stomates are opened in times or locations where the atmospheric vapor pressure deficit, represented by (e*l – el ) in Eq. 11-4, is relatively low, then the gradient driving diffusion of water vapor out of the leaves will be relatively small, and the WUE will be relatively high. In the context of agriculture, this would suggest that if our goal is to increase WUE, then we should consider focusing future crop production in more humid climates. Another option could be to shift crop growing seasons earlier such that more crop growth occurs during the cooler parts of the year when the vapor pressure deficit is lower. Of course, such shifts in the growing season may increase WUE but also increase risk of freeze damage or slow crop growth due to low temperatures.

Major research investments have been made around the world to study the intrinsic water use efficiency of important crops and to seek ways to increase water use efficiency through plant breeding or genetic engineering. However, the logical justification for this work may not be altogether solid [9]. There is not clear evidence that increasing the intrinsic water use efficiency of crop varieties will result in increased crop production or more drought-resistant crops or reduced water use in agriculture [10]. A stronger case can be made that research efforts should be focused on improving crop yields by increasing crop water use, i.e. transpiration, not water use efficiency per se. Crop varieties that are able to sustain higher rates of transpiration through effective use of soil water, especially during critical reproductive periods, will be more productive than other varieties in water-limited environments. This is a consequence of the strong, linear relationship of plant biomass accumulation to transpiration.

Rain or Shine by Tyson Oschner is licensed under a Creative Commons Attribution 4.0 International License, except where otherwise noted.