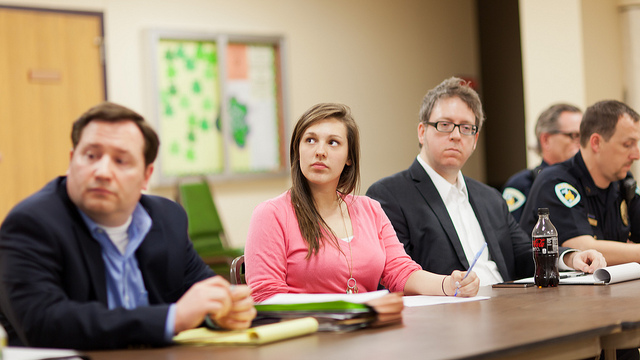 If listening were easy, and if all people went about it in the same way, the task for a public speaker would be much easier. Even Aristotle, as long ago as 325 BC, recognized that listeners in his audience were varied in listening style. He differentiated them as follows:

Rhetoric falls into three divisions, determined by the three classes of listeners to speeches. For of the three elements in speech-making—speaker, subject, and person addressed—it is the last one, the hearer, that determines the speech’s end and object. The hearer must be either a judge, with a decision to make about things past or future, or an observer. A member of the assembly decides about future events, a juryman about past events: while those who merely decide on the orator’s skill are observers (Aristotle, c. 350 BCE).

Our audiences today are likely to be much more heterogeneous. Think about the classroom audience that will listen to your speeches in this course. Your classmates come from many religious and ethnic backgrounds. Some of them may speak English as a second language. Some might be survivors of war-torn parts of the world such as Bosnia, Darfur, or northwest China. Being mindful of such differences will help you prepare a speech in which you minimize the potential for misunderstanding.

Part of the potential for misunderstanding is the difference in listening styles. In an article in the International Journal of Listening, Watson, Barker, and Weaver (Watson, et al., 1995) identified four listening styles: people, action, content, and time.

The is interested in the speaker. People-oriented listeners listen to the message in order to learn how the speaker thinks and how they feel about their message. For instance, when people-oriented listeners listen to an interview with a famous rap artist, they are likely to be more curious about the artist as an individual than about music, even though the people-oriented listener might also appreciate the artist’s work. If you are a people-oriented listener, you might have certain questions you hope will be answered, such as: Does the artist feel successful? What’s it like to be famous? What kind of educational background does he or she have? In the same way, if we’re listening to a doctor who responded to the earthquake crisis in Haiti, we might be more interested in the doctor as a person than in the state of affairs for Haitians. Why did he or she go to Haiti? How did he or she get away from his or her normal practice and patients? How many lives did he or she save? We might be less interested in the equally important and urgent needs for food, shelter, and sanitation following the earthquake.

The people-oriented listener is likely to be more attentive to the speaker than to the message. If you tend to be such a listener, understand that the message is about what is important to the speaker.

are primarily interested in finding out what the speaker wants. Does the speaker want votes, donations, volunteers, or something else? It’s sometimes difficult for an action-oriented speaker to listen through the descriptions, evidence, and explanations with which a speaker builds his or her case.

Action-oriented listening is sometimes called task-oriented listening. In it, the listener seeks a clear message about what needs to be done, and might have less patience for listening to the reasons behind the task. This can be especially true if the reasons are complicated. For example, when you’re a passenger on an airplane waiting to push back from the gate, a flight attendant delivers a brief speech called the preflight safety briefing. The flight attendant does not read the findings of a safety study or the regulations about seat belts. The flight attendant doesn’t explain that the content of his or her speech is actually mandated by the Federal Aviation Administration. Instead, the attendant says only to buckle up so we can leave. An action-oriented listener finds “buckling up” a more compelling message than a message about the underlying reasons.

are interested in the message itself, whether it makes sense, what it means, and whether it’s accurate. When you give a speech, many members of your classroom audience will be content-oriented listeners who will be interested in learning from you. You therefore have an obligation to represent the truth in the fullest way you can. You can emphasize an idea, but if you exaggerate, you could lose credibility in the minds of your content-oriented audience. You can advocate ideas that are important to you, but if you omit important limitations, you are withholding part of the truth and could leave your audience with an inaccurate view.

Imagine you’re delivering a speech on the plight of orphans in Africa. If you just talk about the fact that there are over forty-five million orphans in Africa but don’t explain why, you’ll sound like an infomercial. In such an instance, your audience’s response is likely to be less enthusiastic than you might want. Instead, content-oriented listeners want to listen to well-developed information with solid explanations.

People using a style prefer a message that gets to the point quickly. Time-oriented listeners can become impatient with slow delivery or lengthy explanations. This kind of listener may be receptive for only a brief amount of time and may become rude or even hostile if the speaker expects a longer focus of attention. Time-oriented listeners convey their impatience through eye rolling, shifting about in their seats, checking their cell phones, and other inappropriate behaviors. If you’ve been asked to speak to a group of middle-school students, you need to realize that their attention spans are simply not as long as those of college students. This is an important reason speeches to young audiences must be shorter, or broken up by more variety than speeches to adults.

In your professional future, some of your audience members will have real time constraints, not merely perceived ones. Imagine that you’ve been asked to deliver a speech on a new project to the board of directors of a local corporation. Chances are the people on the board of directors are all pressed for time. If your speech is long and filled with overly detailed information, time-oriented listeners will simply start to tune you out as you’re speaking. Obviously, if time-oriented listeners start tuning you out, they will not be listening to your message. This is not the same thing as being a time-oriented listener who might be less interested in the message content than in its length.

interested in the speaker; listens to the message in order to learn how the speaker thinks and how they feel about their message

primarily interested in finding out what the speaker wants

are interested in the message itself, whether it makes sense, what it means, and whether it’s accurate

prefer a message that gets to the point quickly