The way the argumentation is presented in a persuasive essay is also special because writers do not only care about presenting their stance. They also want to include the point of view of their opponents to show that they have considered all possible angles of the controversy and have enough evidence to prove that the other side is wrong.

Two Sides and One Controversy

Taking into account the need to incorporate both sides of the controversy, observe the arguments presented in the Room for Debate page, which have been paraphrased for you below. If you were given the task to write a persuasive essay on the MLDA topic, how would you organize these arguments to compose three body paragraphs?

Although the persuasive essay includes the two sides of a controversy, it does pay more attention to the position with which the writer is siding. The order in which the arguments are introduced is crucial to make the piece more persuasive. Traditionally, writers choose between three possible organization templates: 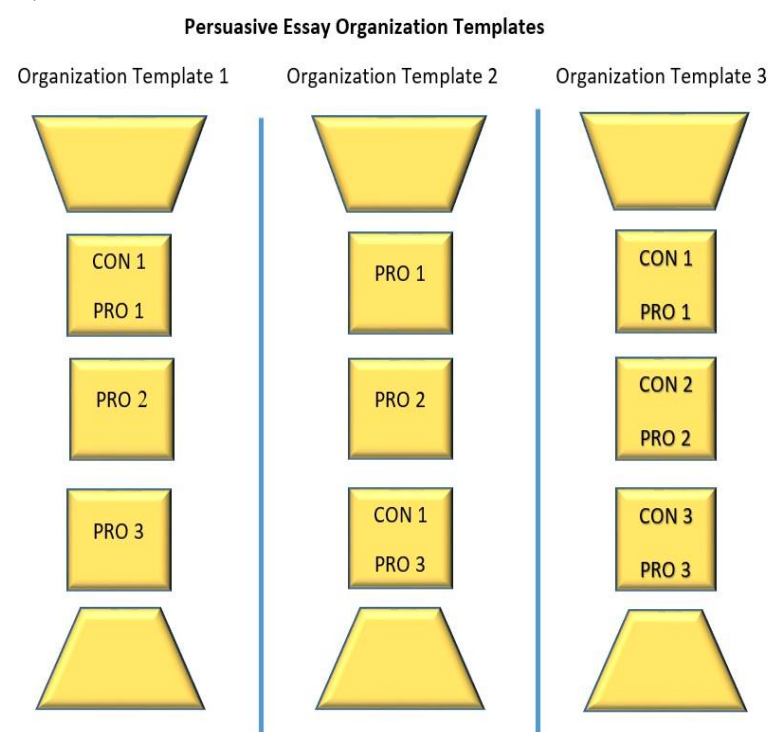 Advantages and Disadvantages of Each Template

Which could be the advantages and disadvantages of these two different organization templates? List them down in the chart below. Compare and discuss your list with your colleagues:

Alcoholic consumption began for many as a symbol of friends and acquaintances coming together to simply enjoy life and “be merry.” However, in the United States, alcoholic consumption and the law have collided quite often in the past. The most recent and ongoing controversy regarding drinking is whether the legal drinking age should be lowered from twenty-one to eighteen. This is a huge controversy specifically relevant to college students, as drinking at American universities has grown to become a defining part of college life despite the fact that a majority of college students cannot even legally drink. It is clear through the prevalence and dangers of binge drinking among college students and the high percentage of DUI and alcohol-related accidents and deaths that something needs to change in this country. Lowering the drinking age from twenty-one to eighteen would be an effective and beneficial step in changing the binge-drinking culture in this country, encouraging drinking alcohol as a safe and enjoyable activity, and facilitating medical attention for those involved in alcohol-related accidents.

First of all, lowering the drinking age to eighteen will eliminate the thrill of breaking the law for eighteen to twenty year olds. The idea of being rebellious and breaking the law while still having fun and not harming others in the process is an appealing and exciting idea for many underage college students. With drinking being illegal for those under twenty-one and with the risk of “getting caught” always present and stimulating, drinking tends to become a more furtive act with it taking place in people’s dorm rooms, basements, etc. It is in these situations where drinking becomes the most dangerous, where pre-gaming, taking multiple shots in a row, and trying to get as drunk as quickly and efficiently as possible fosters binge drinking. If the drinking age was lowered to eighteen, there wouldn’t be that thrill to want what we can’t have because it would be legal. In traveling to England recently, where the legal drinking age is set at eighteen, I have observed how Americans visiting, studying, or living in England who are in the eighteen to twenty-year-old range treat drinking completely differently than the eighteen to twenty-year-olds here. In England, those Americans treated drinking as simply a normal social activity because it was legal and there wasn’t that thrill to break the law; in contrast, I only witness the binge drinking and “Get drunk” mentality, rarely, the mentality to drink in a relaxed and normal atmosphere for those under twenty-one range are going to drink regardless of if it’s legal or not. The difference lies in the fact that if it’s legal, there is no peer pressure or temptation to commit something illegal so less risky behaviors and treatment of alcohol will result.

In the second place, because alcoholic consumption is considered an illegal activity for people until they reach age twenty-one, oftentimes teenagers are never really taught how to drink in moderation beforehand and therefore are more likely to abuse alcohol and binge drink. While the National Institute of Drug Abuse (2014) shows that drinking levels among younger people (and the American population in general), are decreasing, younger people are more likely to binge drink when they do consume alcohol (Kennet, 2008). However, I hold that binge drinking could be substantially lowered if the drinking age was lowered. This is because 18-20-year olds would then be able to experience moderate drinking in bars, restaurants, and other venues where there is supervision. Since this is currently illegal under the law, 18-20 year olds are now forced to drink in unsupervised venues were moderation is untaught and binge drinking is encouraged. In fact, having the drinking age set at the age of 21 has not stopped drinking among the 18-20-year-old age group, but has rather encouraged the movement of drinking to such unsupervised places were dangerous drinking behaviors are more likely to take place. The legal drinking age being set at 21 simply perpetuates the lack of a moderating culture in this country. Oftentimes, parents dismiss the idea that they need to educate their child on alcohol. With a lower drinking age, more parents would feel responsibility to introduce their children to alcohol in the controlled environment of the household beforehand as a means of education and instruct them on how to use alcohol in moderation. A Penn State research study (Abar & Turrisi, 2008) even showed a direct correlation between parents’ talking to their child about alcohol before entering college and subsequently lower rates of binge drinking. A lower drinking age would expose 18-20-year olds to a greater multitude of adults who can provide supervisory guidance over how to use alcohol moderately and therefore encourage less risky drinking behaviors.

Many opponents to the lowering of the drinking age argue that it will result in more alcohol-related accidents and deaths, especially while driving. Drunk driving deaths have actually steadily decreased in the past thirty years. In fact, this trend began occurring since 1982, two years before the legal drinking age became twenty-one through the Uniform Drinking Age Act. It has shown that this trend occurred throughout all age groups and various other categories and therefore cannot be directly attributed to the drinking age. An estimated 90% of drunk driving deaths in the United States were found in the over 21 age group so drunk driving cannot be necessarily attributed to age (SAMHSA, 2010). Furthermore, the same source reports that the amount of drunk driving deaths in the United States has decreased at a slower rate than that European of European countries that have their legal drinking age at eighteen or lower. As many people argue that lowering the drinking age is fatal, lowering the drinking age is actually going to save lives. This is because it will reduce the amount of people that become injured due to alcohol or that simply die because of alcohol poisoning who fail, or have others fail, to report their injuries to the police or the ambulance out of fear of legal consequences for underage drinking. Many states currently have laws that protect an underage person from the legal consequences of underage drinking if they go and seek medical attention; however, not many college students are aware of these laws and are still hesitant nevertheless out of fear that it may get back to their parents. Lowering the drinking age would encourage those in the 18-20-year-old range to seek medical attention for potentially fatal alcoholic injuries without fear of potential consequences for doing so, in turn saving the lives of many young adults, especially those in college.

We are all aware of the drinking culture that takes place in this country. Particularly among college students, drinking has turned into a dangerous practice that is the result of the excitement of alcohol’s illegality for most college students and the fact that public officials and adults use drinking as a tool to punish and prevent a potentially enjoyable activity among an age group instead of encouraging the enjoyable and safe practice that drinking can be fore them. Lowering the drinking age, as exhibited around the world, can show how drinking can bring young adults and adults together in a fun, safe way instead of creating a disparity among them. If those young adults in the 18-20-year-old range share the adult same responsibilities that other adults do, then having the right to choose to drink should be no exception. It is time that alcoholic use, especially by college students, becomes a safe practice in this country instead of one whose culture lies concealed from sight and forced to grow uncontrollably and treacherously. It is time that eighteen, nineteen, and twenty year olds finally be trusted as the adults we are considered in every other way.

Kennet, J. (2008). Alcohol Use. In SAMHSA, Results form the 2007 National Survey on Drug Use and Health: National Findings (SMA 08-4343). Retrieved from: https://www.samhsa.gov/data/sites/default/files/cbhsq-reports/2007_NSDUH_Detailed_Tables/Intro.pdf

Organizing Your Arguments by Alys Avalos-Rivera is licensed under a Creative Commons Attribution 4.0 International License, except where otherwise noted.