This chapter introduces a way of evaluating sentences and arguments of SL. Although it can be laborious, the truth table method is a purely mechanical procedure that requires no intuition or special insight.

In this chapter, we will make use of the fact that all of the logical operators in SL are truth-functional— it makes it possible to construct truth tables to determine the logical features of sentences. You should realize, however, that this is not possible for all languages. In English, it is possible to form a new sentence from any simpler sentence X by saying ‘It is possible that X .’ The truth-value of this new sentence does not depend directly on the truth-value of X . Even if X is false, perhaps in some sense X could have been true— then the new sentence would be true. Some formal languages, called modal logics, have an operator for possibility. In a modal logic, we could translate ‘It is possible that X ’ as ◊X . However, the ability to translate sentences like these come at a cost: The ◊ operator is not truth-functional, and so modal logics are not amenable to truth tables.

The truth-value of sentences which contain only one connective are given by the characteristic truth table for that connective. In the previous chapter, we wrote the characteristic truth tables with ‘T’ for true and ‘F’ for false. It is important to note, however, that this is not about truth in any deep or cosmic sense. Poets and philosophers can argue at length about the nature and significance truth, but the truth functions in SL are just rules which transform input values into output values. To underscore this, in this chapter we will write ‘1’ and ‘0’ instead of ‘T’ and ‘F’. Even though we interpret ‘1’ as meaning ‘true’ and ‘0’ as meaning ‘false’, computers can be programmed to fill out truth tables in a purely mechanical way. In a machine, ‘1’ might mean that a register is switched on and ‘0’ that the register is switched off. Mathematically, they are just the two possible values that a sentence of SL can have. The truth tables for the connectives of SL, written in terms of 1s and 0s, are given in table 5.1.

The characteristic truth table for conjunction, for example, gives the truth conditions for any sentence of the form (A & B). Even if the conjuncts A and B are long, complicated sentences, the conjunction is true if and only if both A and B are true. Consider the sentence (H & I) →H. We consider all the possible combinations of true and false for H and I, which gives us four rows. We then copy the truth-values for the sentence letters and write them underneath the letters in the sentence. 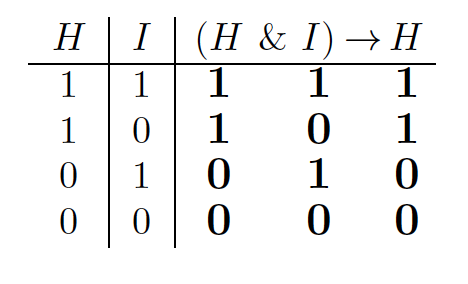 Now consider the subsentence H & I. This is a conjunction A & B with H as A and with I as B. H and I are both true on the first row. Since a conjunction is true when both conjuncts are true, we write a 1 underneath the conjunction symbol. We continue for the other three rows and get this: 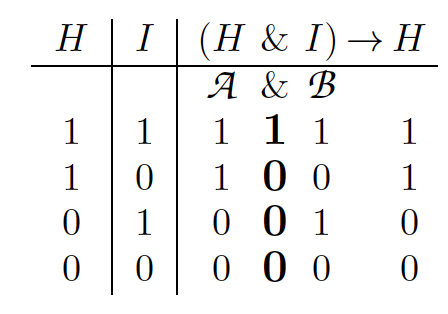 The entire sentence is a conditional A → B with (H & I) as A and with H as B. On the second row, for example, (H & I) is false and H is true. Since a conditional is true when the antecedent is false, we write a 1 in the second row underneath the conditional symbol. We continue for the other three rows and get this: 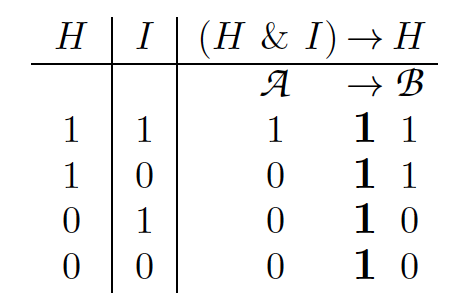 The column of 1s underneath the conditional tells us that the sentence (H & I)   →  I is true regardless of the truth-values of H and I. They can be true or false in any combination, and the compound sentence still comes out true. It is crucial that we have considered all of the possible combinations. If we only had a two-line truth table, we could not be sure that the sentence was not false for some other combination of truth-values.

In this example, we have not repeated all of the entries in every successive table. When actually writing truth tables on paper, however, it is impractical to erase whole columns or rewrite the whole table for every step. Although it is more crowded, the truth table can be written in this way: 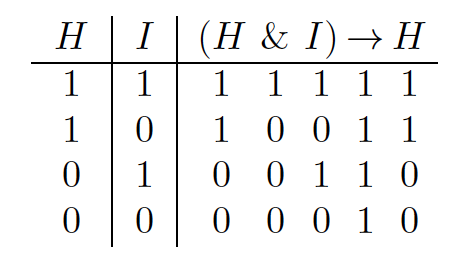 Looking at the column underneath the main connective, we see that the sentence is false on both rows of the table; i.e., it is false regardless of whether C is true or false.

A sentence that contains two sentence letters requires four lines for a complete truth table, as in the characteristic truth tables and the table for (H & I) → I. 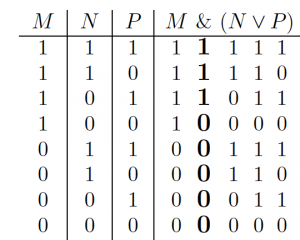 In order to fill in the columns of a complete truth table, begin with the right-most sentence letter and alternate 1s and 0s. In the next column to the left, write two 1s, write two 0s, and repeat. For the third sentence letter, write four 1s followed by four 0s. This yields an eight line truth table like the one above.

So a sentence is a TAUTOLOGY IN SL if the column under its main connective is 1 on every row of a complete truth table.

Conversely, a sentence is a CONTRADICTION IN SL if the column under its main connective is 0 on every row of a complete truth table.

Consider the sentences ¬(A ∨ B) and ¬A & ¬B. Are they logically equivalent? To find out, we construct a truth table.

Look at the columns for the main connectives; negation for the first sentence, conjunction for the second. On the first three rows, both are 0. On the final row, both are 1. Since they match on every row, the two sentences are logically equivalent.

Is it valid? To find out, we construct a truth table.

Yes, the argument is valid. The only row on which both the premises are 1 is the second row, and on that row the conclusion is also 1.

Consider, for example, the sentence (U & T ) → (S & W ). We want to show that it is not a tautology by providing a partial truth table. We fill in 0 for the entire sentence. The main connective of the sentence is a conditional. In order for the conditional to be false, the antecedent must be true (1) and the consequent must be false (0). So we fill these in on the table:

Now we just need to make (S & W ) false. To do this, we need to make at least one of S and W false. We can make both S and W false if we want.  All  that matters is that the whole sentence turns out false on this line. Making an arbitrary decision, we finish the table in this way:

Table 5.2 summarizes when a complete truth table is required and when a partial truth table will do.

If you want additional practice, you can construct truth tables for any of the sentences and arguments in the exercises for the previous chapter.

* Part A Determine whether each sentence is a tautology, a contradiction, or a contingent sentence. Justify your answer with a complete or partial truth table where appropriate. 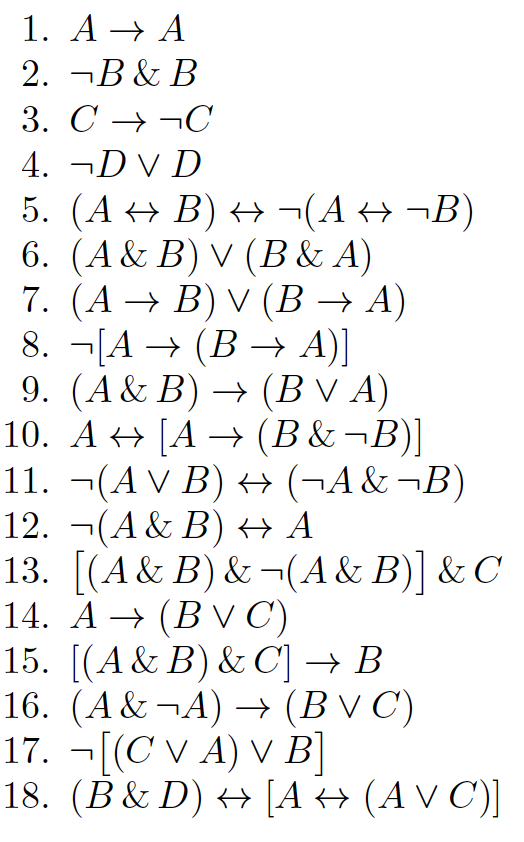 *  Part B Determine whether each pair of sentences is logically equivalent. Justify your answer with a complete or partial truth table where appropriate. 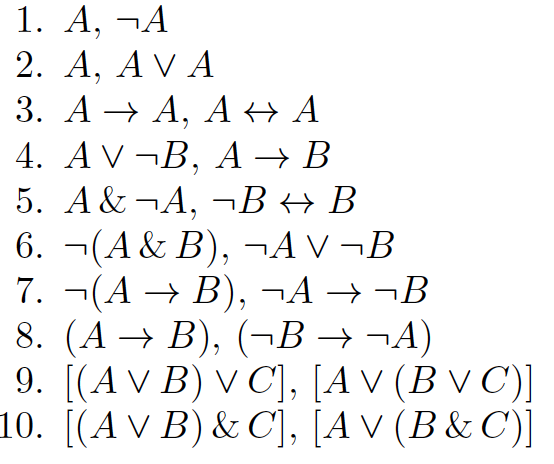 * Part C Determine whether each set of sentences is consistent or inconsistent. Justify your answer with a complete or partial truth table where appropriate. 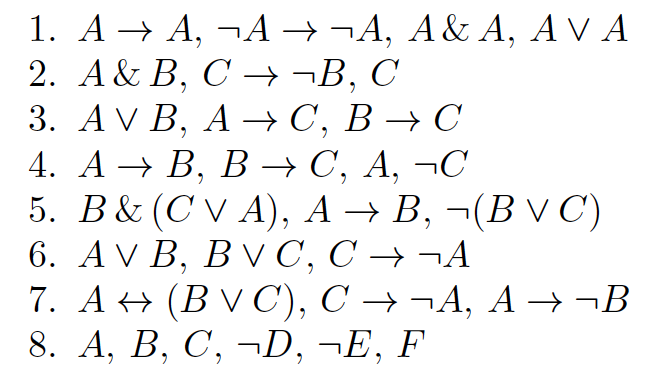 *  Part D Determine whether each argument is valid or invalid. Justify your answer with a complete or partial truth table where appropriate. 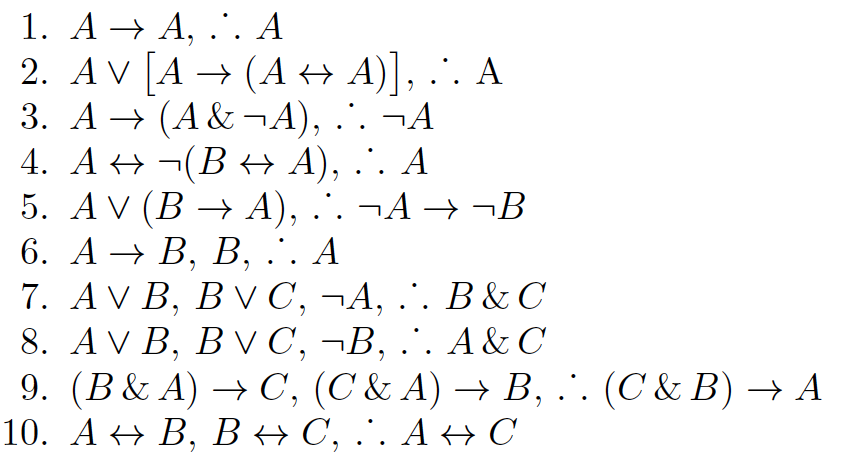 *  Part E Answer each of the questions below and justify your answer.

Part F We could leave the biconditional (↔) out of the language. If we did that, we could still write ‘A ↔ B’ so as to make sentences easier to read, but that would be shorthand for (A → B) & (B → A).  The resulting language would be formally equivalent to SL, since A  ↔  B and (A  →   B) & (B  →   A) are logically equivalent in SL. If we valued formal simplicity over expressive richness, we could replace more of the connectives with notational conventions and still have a language equivalent to SL.

The Sheffer stroke is a logical connective with the following characteristic truthtable: 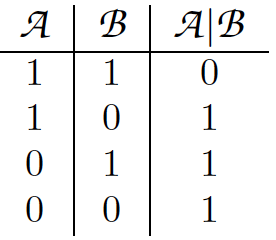 7. Write a sentence using the connectives of SL that is logically equivalent to (A|B).