Pictures and diagrams can be very useful in presenting information or assisting reasoning. In this module we shall focus on Venn diagram. They are used to represent classes of objects. We can also use them to evaluate the validity of certain types of arguments.

Venn diagrams are named after the British logician John Venn (1834-1923), a fellow of Gonville and Caius college at Cambridge University. He was also a philosopher and mathematician, a pioneer of logic and probability theory.

1. A class is defined by its members 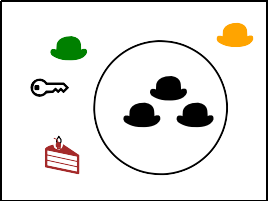 2. Classes are represented by circles

3. Use shading to indicate an empty class 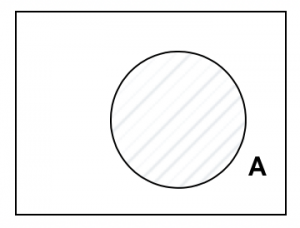 To indicate that a class is empty, we shade the circle representing that class. So the diagram above means that class A is empty. 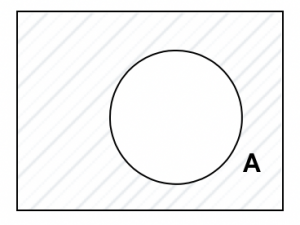 In general, shading an area means that the class represented by the area is empty. So the second diagram above represents a situation where there isn’t anything which is not a member of class A.

However, even though shading indicates emptiness, a region that is not shaded does not necessarily indicate a non-empty class. As we shall see in the next tutorial, we use a tick to indicate existence. So in the second diagram above, the circle marked A is not shaded. This does not imply that there are things which exist which are members of A. If the area is blank, this means that we do not have any information as to whether there is anything there.

III. Everything and nothing 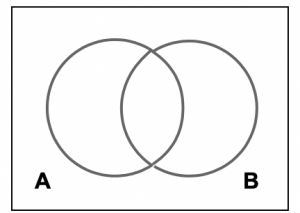 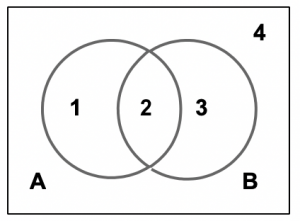 Furthermore, which region represents the class that contains sour lemons that are not sweet? 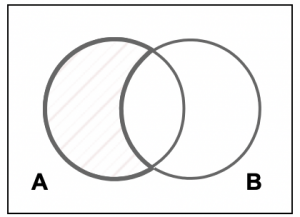 Continuing with our diagram, suppose we now shade region 1. This means that the class of things which belong to A but not B is empty. Or more simply, every A is a B. ( It might be useful to note that this is equivalent to saying that if anything is an A, it is also a B. ) This is an important point to remember. Whenever you want to represent “every A is B”, shade the area within the A circle that is outside the B circle. 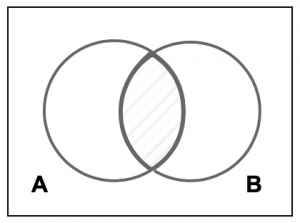 What if we shade the middle region where A and B overlaps? This is the region representing things which are both A and B. So shading indicates that nothing is both A and B. If you think about it carefully, you will see that “Nothing is both A and B” says the same thing as “No A is a B” and “No B is an A”. Make sure that you understand why these claims are logically equivalent! 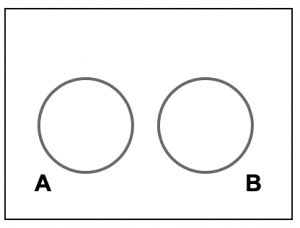 Incidentally, we could have represented the same information by using two non-overlapping circles instead. 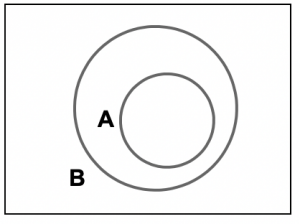 See if you can explain what each diagram represents. 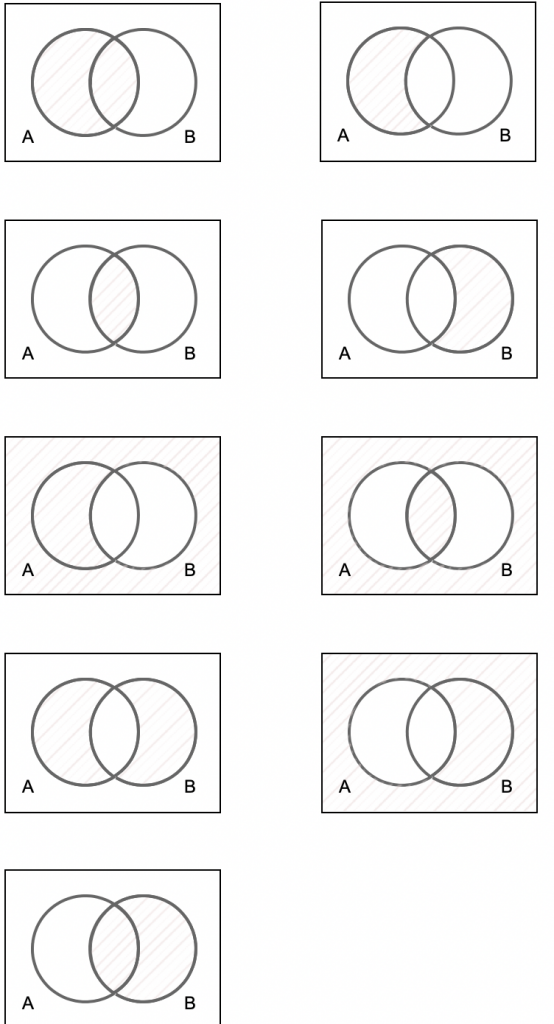 As you can see from the diagram below, with three circles we can have eight different regions, the eighth being the region outside the circles. The top circle represents the class of As, whereas the circles on the left and the right below it represent the class of Bs and Cs respectively. The area outside all the circles represents those objects which are not members of any of these three classes. 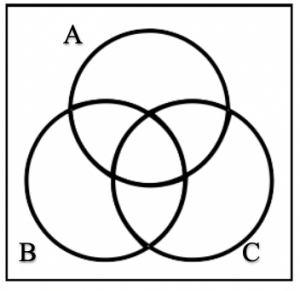 Now that you know what each of the region represents, you should know how to use shading to represent situations where “Every X is Y”, or “No X is Y”. As before, shading an area indicates that nothing exists in the class that is represented by the shaded region.

Look at the sentences in the diagram below. Ask yourself which region should be shaded to represent the situation described by the sentence. Then click that sentence and check the answer.

We have seen how to use shading to indicate that there is nothing in the class represented by the shaded region. We now see how to use ticks to indicate existence. The basic idea is that when a tick is present in a region, it indicates that there is something in the class represented by the region. So for example, in the diagram below, we have a tick outside the circles. Since the area outside the circle represents the class of things that are neither A, nor B, nor C, the diagram is saying that something exists that is neither A nor B nor C:

There are two important points to remember :

What about the following diagram? What does it represent? 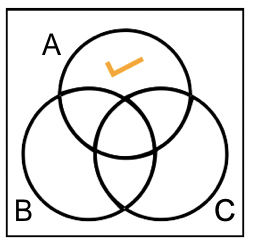 The diagram above does NOT say “something is A”. Actually it says something more specific, namely that “something is A but is not B and not C”. If you have given the wrong answer, you might be thinking that the tick indicates that there is something in the class represented by the A circle. But here we use a tick to indicate existence in the class represented by the smallest bounded region that encloses the tick. In the top diagram of this page the smallest bounded area that encloses the tick is the area outside the three circles. In the diagram above, although circle A does enclose the tick, it is not the smallest bounded area that does that. That smallest region is the colored one in this diagram : 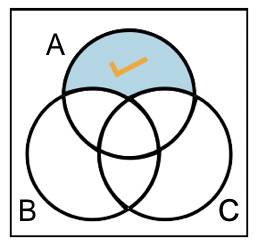 Now see if you can determine what these diagrams indicate.

Notice in the last diagram above, the two ticks indicate that there are two different things. What if you just want to say “Something is C but not A”? The way to do this is to put a tick across two bounded regions, as follows:

Notice that the tick does not tell us whether there is anything that is B, because it is not completely enclosed by the B circle.

See if you can explain why these diagrams represent:

So far we have used ticks to cut across only two bounded regions. But of course there are other possibilities: 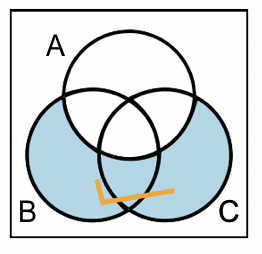 What do you think this means? Applying the same rule of interpretation as before, we see that the smallest closed region that encloses the big tick would have to be the combined three regions which the tick spreads across. This combined region represents things which are either B or C (or both), but which are not A. So what the diagram says is that there is something of this kind.

So what if we just want to represent the fact that something is A? Here is one way to draw the diagram: Notice that the tick cuts across all the different regions within the A circle, and is completely enclosed by it. 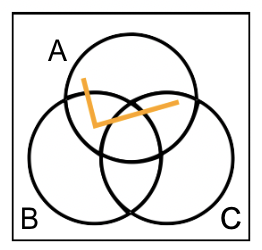 We can now combine what we have learnt about ticks and shading together. Suppose we start with the information that something is both A and C. We therefore draw the following diagram : 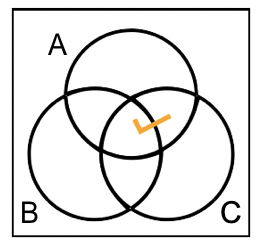 Now suppose we are also told that every C is a B. So we add the additional information by shading the appropriate area, and end up with this diagram : 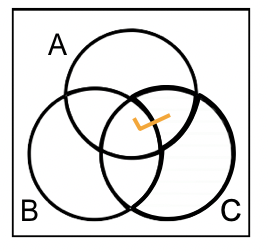 How should this be interpreted and what should we conclude? Half of the green tick is in a shaded region. What does that mean? Give yourself a minute to think about it before you read on … 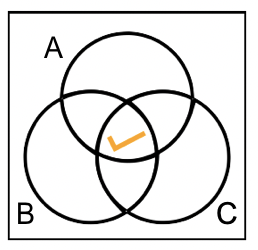 So here is a general principle you should remember:

A truncated tick within a region R counts as a complete tick in R if part of the tick is in R and all other parts not in R are in shaded regions.

Is the Statement “something is either B or C” true according to the diagram?

Is the diagram consistent with the statement “Everything is B or not C, or both”?

Is the diagram consistent with the statement “Something is B and not A”?

Is the diagram consistent with the statement “Everything is A or C”?

What does the diagram tell us?

We now see how Venn diagrams can be used to evaluate certain arguments. There are many arguments that cannot be analysed using Venn diagrams. So we shall restrict our attention only to arguments with these properties:

(Premise #1) Every whale is a mammal.

(Premise #2) Every mammal is warm-blooded.

(Conclusion) Every whale is warm-blooded.

(Conclusion) No chicken is sick.

Draw a Venn diagram with 3 circles.

Represent the information in the two premises.

Draw an appropriate outline for the conclusion. Fill in the blank in “If the conclusion is true according to the diagram, the outlined region should.”

See whether the condition that is written down is satisfied. If so, the argument is valid. Otherwise not. 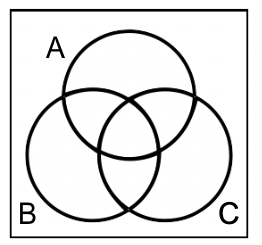 Let us apply this method to the first argument on this page : 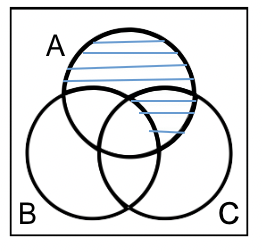 Step 2a : We now represent the information in the first premise. (Every whale is a mammal.) 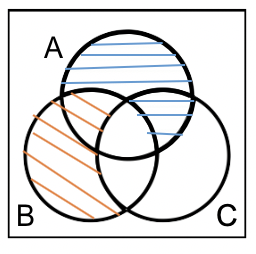 Step 2b : We now represent the information in the second premise. (Every mammal is warm-blooded.) 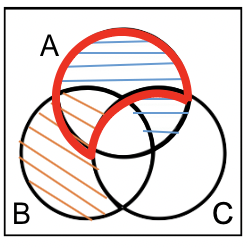 Step 4 : Since this is indeed the case, this means that whenever the premises are true, the conclusion must also be true. So the argument is valid.

Let’s go through another example:

Therefore, some A is C.

We now draw a Venn diagram to represent the two premises: 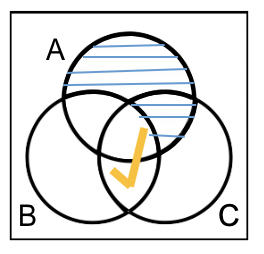 In the diagram above, we have already drawn a Venn diagram for the three classes and encode the information in the first two premises. To carry out the third step, we need to draw an outline for the conclusion. Do you know where the outline should be drawn?

Therefore, some A is C. 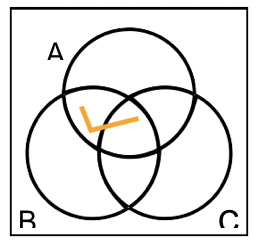 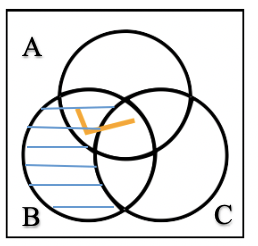 Step 3: Add an outline for conclusion

Although Venn diagrams can help us reason about classes of objects, they also have many limitations. First of all, the diagrams can become too complicated to deal with if we are reasoning about many classes of objects. So far in our tutorials we have considered Venn diagrams with at most three circles. It is possible to add more bounded regions if we are dealing with more than three classes, but then the resulting diagrams will become rather difficult to handle and interpret. It is very easy to make mistakes when we encode information in such diagrams.

The other problem with Venn diagrams is that they have limited expressive power. What this means is that there are many pieces of information that cannot be accurately represented. For example, our system of notation allows us to talk about classes of objects, but not particular individual objects. For example, to say that a and b are cats and c and d are not, we might have to introduce new symbols, using dots to represent individuals, as in the diagram below: 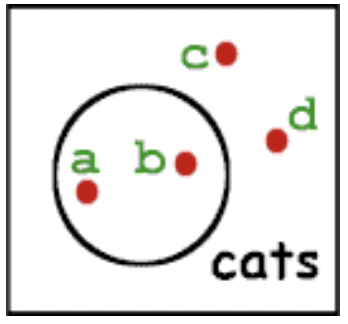 However, even with this new notation, there are still other pieces of information that cannot be represented, such as:

Perhaps it might be possible to introduce additional new symbols to represent such ideas. But then the system of Venn diagrams will get really complicated and difficult to use. So now that we know the limitations of Venn diagrams, we should be in a better position to know when they are useful and when they are not. 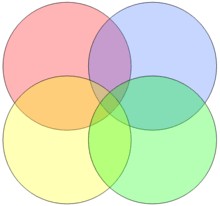 Is this a suitable Venn diagram for showing the relationships between four sets of objects? 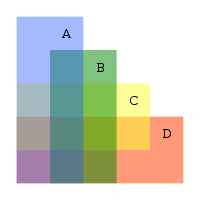 In the second diagram, there are four overlapping rectangles. Which area corresponds to those items which are A, B and D, but not C?

1 This chapter is taken from http://philosophy.hku.hk/think/ and are in use under the creative commons license.