If we want to study how we ought to reason (normative) we should start by looking at the primary way that we do reason (descriptive): through the use of arguments. In order to develop a theory of good reasoning, we will start with an account of what an argument is and then proceed to talk about what constitutes a “good” argument.

Example: The world will end on August 6, 2045. I know this because my dad told me so and my dad is smart.

In this instance, the conclusion is the first sentence (“The world will end…”); the premises (however dubious) are revealed in the second sentence (“I know this because…”).

Conclusions and premises are articulated in the form of statements. Statements are sentences that can be determined to possess or lack truth. Some examples of true-or-false statements can be found below. (Notice that while some statements are categorically true or false, others may or may not be true depending on when they are made or who is making them.)

Examples of sentences that are statements:

However, there are many sentences that cannot so easily be determined to be true or false. For this reason, these sentences identified below are not considered statements.

Question: Why are arguments only made up of statements?

Second, only statements can provide reasons to believe.

(c) There will be a war in the next year.

∴ There will be a war in the next year.

Of course, arguments do not come labeled as such. And so we must be able to look at a passage and identify whether the passage contains an argument and if it does, we should also be identify which statements are the premises and which statement is the conclusion. This is harder than you might think!

There was a massive stampede outside of Tulsa. Crops were trampled and some cows were killed. Officials are not sure why the stampede started, but they are in the process of investigating the cause.

There is no argument here. There is no statement being argued for. There are no statements being used as reasons to believe. This is simply a report of information.

The following are also not arguments:

Warnings: No lifeguard on duty. Be careful.

Associated claims: Fear leads to anger. Anger leads to the dark side.

When you have an argument, the passage will express some process of reasoning. There will be statements presented that serve to help the speaker building a case for the conclusion.

IV. How to Look for Arguments[1]

How do we identify arguments in real life? There are no easy, mechanical rules, and we usually have to rely on the context in order to determine which are the premises and the conclusions. But sometimes the job can be made easier by the presence of certain premise or conclusion indicators. For example, if a person makes a statement, and then adds “this is because …,” then it is quite likely that the first statement is presented as a conclusion, supported by the statements that come afterward. Other words in English that might be used to indicate the premises to follow include:

Of course whether such words are used to indicate premises or not depends on the context. For example, “since” has a very different function in a statement like “I have been here since noon,” unlike “X is an even number since X is divisible by 4.” In the first instance (“since noon”) “since” means “from.” In the second instance, “since” means “because.”

Conclusions, on the other hand, are often preceded by words like:

Here are some examples of passages that do not contain arguments.

1. When people sweat a lot they tend to drink more water. [Just a single statement, not enough to make an argument.]

2. Once upon a time there was a prince and a princess. They lived happily together and one day they decided to have a baby. But the baby grew up to be a nasty and cruel person and they regret it very much. [A chronological description of facts composed of statements but no premise or conclusion.]

3. Can you come to the meeting tomorrow? [A question that does not contain an argument.]

Do these passages contain arguments? If so, what are their conclusions?

Q: What does it mean for an argument to be good? What are the different ways in which arguments can be good? Good arguments:

The focus of logic is primarily about one type of goodness: The logical relationship between premises and conclusion.

The two main types of arguments are called deductive and inductive arguments. We differentiate them in terms of the type of support that the premises are meant to provide for the conclusion.

Deductive Arguments are arguments in which the premises are meant to provide conclusive logical support for the conclusion.

1. All humans are mortal

1. No student in this class will fail.

2. Mary is a student in this class.

∴ Therefore, Mary will not fail.

1. A intersects lines B and C.

∴ B and C are parallel lines.

Inductive arguments are, by their very nature, risky arguments.

Arguments in which premises provide probable support for the conclusion.

1. Ten percent of all customers in this restaurant order soda.

∴ John will not order Soda..

1. Some students work on campus.

1. Vegas has the Carolina Panthers as a six-point favorite for the super bowl.

Deductive arguments attempt to be valid.

An argument is valid if it is impossible for the premises to be true and the conclusion false.

To put validity in another way: if the premises are true, then the conclusion must be true.

Q: What does this mean?

Let’s go back to example #1. Here are the premises:

If both of these premises are true, then every human that we find must be a mortal. And this means, that it must be the case that if Socrates is a human, that Socrates is mortal.

The second type of goodness for deductive arguments: The premises provide us the right reasons to accept the conclusion.

An argument is sound if it is valid AND the premises are true.

Our original argument is a sound one:

Question: Can a sound argument have a false conclusion?

Question: What happens if we mix around the premises and conclusion?

∴ Socrates is a human.

∴ All humans are mortal.

Are these valid deductive arguments?

NO, but they are common inductive arguments.

Suppose that there are two opaque glass jars with different color marbles in them.

∴ This marble came from jar #1.

While this is a very risky argument, what if we drew 100 marbles from jar #2 and found that they were all red? Would this affect the second argument’s validity?

∴ Therefore, the next coin flip will land heads.

An important part of evaluating arguments is not to represent the arguments of others in a deliberately weak way.

For example, suppose that I state the following:

All humans are mortal, so Socrates is mortal.

Is this valid? Not as it stands. But clearly, I believe that Socrates is a human being. Or I thought that was assumed in the conversation. That premise was clearly an implicit one.

So one of the things we can do in the evaluation of argument is to take an argument as it is stated, and represent it in a way such that it is a valid deductive argument or a strong inductive one. In doing so, we are making explicit what one would have to assume to provide a good argument (in the sense that the premises provide good – conclusive or probable – reason to accept the conclusion).

The teacher’s policy on extra credit was unfair because Sally was the only person to have a chance at receiving extra credit.

Therefore, the teacher’s policy on extra credit was unfair.

Ordinary workers receive worker’s compensation benefits if they suffer an on-the-job injury. However, universities have no obligations to pay similar compensation to student athletes if they are hurt while playing sports. So, universities are not doing what they should.

Therefore, universities are not doing what they should.

Therefore, the next president will not be able to implement a single-payer healthcare system.

Therefore, Sam’s time will be slower than John’s.

All the arguments we’ve dealt with – except for the last two – have been fairly simple in that the premises always provided direct support for the conclusion. But in many arguments, such as the last one, there are often arguments within arguments.

∴ The next president will not be able to implement a single-payer healthcare system.

It’s clear that premises #2 and #3 are used in support of #4. And #1 in combination with #4 provides support for the conclusion.

When we diagram arguments, the aim is to represent the logical relationships between premises and conclusion. More specifically, we want to identify what each premise supports and how.

This represents that 2+3 together provide support for 4

This represents that 4+1 together provide support for 5

∴ Therefore, Sam’s time will be slower than John’s. 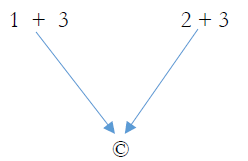 Try diagramming the following argument for yourself. The structure of the argument has been provided below:

∴ Therefore, Socrates has been fed poison, so he will die.