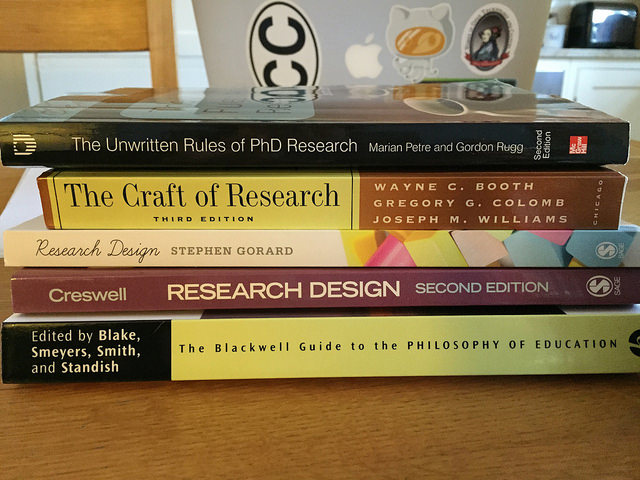 Say it with me: “Research is fun!” OK, now we know that some of you just looked at that sentence and totally disagree, but we’re here to tell you that research is fun. Now, this doesn’t mean that research is easy. In fact, research can be quite difficult and time consuming, but it’s most definitely fun. Let us explain why. First, when conducting research you get to ask questions and actually find answers. If you have ever wondered what the best strategies are when being interviewed for a job, research will tell you. If you’ve ever wondered what it takes to be a NASCAR driver, an astronaut, a marine biologist, or a university professor, once again, research is one of the easiest ways to find answers to questions you’re interested in knowing. Second, research can open a world you never knew existed. We often find ideas we had never considered and learn facts we never knew when we go through the research process. Lastly, research can lead you to new ideas and activities. Maybe you want to learn how to compose music, draw, learn a foreign language, or write a screenplay; research is always the best step toward learning anything.

For the purposes of this book, we define as scholarly investigation into a topic in order to discover, revise, or report facts, theories, and applications. Now you’ll notice that there are three distinct parts of research: discovering, revising, and reporting. The first type of research is when people conduct some kind of study and find something completely new. For example, in 1928 Alexander Fleming accidentally discovered the first antibiotic, penicillin. Before this discovery, there were no antibiotics and simple infections killed people regularly. In this case, Fleming conducted research and discovered something not known to scientists before that time.

The second type of research occurs when people revise existing facts, theories, and applications. The bulk of the work of modern scientists is not really in discovering new things, but rather trying to improve older discoveries. For example, to improve upon the work of Fleming’s first antibiotic, a group of Croatian researchers created azithromycin. Today azithromycin is licensed by Pfizer Inc. under the name Zithromax. In essence, the Croatian scientists built on the work of Fleming and ultimately revised our ability to treat infectious diseases. Today, azithromycin is one of the most prescribed antibiotics in the world.

The last part of research is called the reporting function of research. This is the phase when you accumulate information about a topic and report that information to others. For example, in the previous two paragraphs, we conducted research on the history of antibiotics and provided you with that information. We did not discover anything, nor did we revise anything; we are just reporting the research.

In addition to the three functions of research, there are also three end results that researchers strive toward: facts, theories, and applications. First, a is a truth that is arrived at through the scientific process. For example, in the world of psychology, it is a fact that the human brain influences human behavior. Centuries ago, people believed that human behavior was a result of various combinations of black and yellow biles running through our bodies. However, research failed to find support for this idea, whereas research increasingly found support for the connection between the brain and behavior. Facts are difficult to attain—it can take generations of research before a theory gains acceptance as a scientific fact.

Second, researchers conduct research to understand, contradict, or support theories. A is a proposed explanation for a phenomenon that can be tested scientifically. Scientists work with theories for a very long time, testing them under a variety of conditions attempting to replicate earlier findings or to identify conditions under which earlier findings do not hold true. For example, one theory that often surprises people is the universal theory of gravity. Many people believe that our understanding of gravity is set in stone, and much of physics relies on the assumption that gravity exists, but gravity is not a fact. The fact that the theory of gravity explains is that if I hold my keys out and let go, they will fall to the floor. Physicists are still debating how gravity actually functions and speculating about other explanations for why my keys will fall to the floor. So from a researcher’s perspective, very few things are scientific facts.

Lastly, researchers often look for new applications for something that already exists. For example, botulism was at one point a dreaded bacterium that plagued the US food supply and led to many deaths. In the 1980s, an ophthalmologist named Allan Scott started using a version of botulism to treat muscle spasms in a drug called onabotulinumtoxinA—better known by the brand name Botox (Williamson, 2011). Richard Clark, a plastic surgeon, reported in a 1989 article that the drug also had the side effect of decreasing wrinkles (Clark & Berris, 1989). From deadly bacteria to medical cure to one of the most commonly used cosmetic drugs in the world, the history of Botox has been a constant stream of new applications.

Research generally falls into one of two categories: primary and secondary. is carried out to discover or revise facts, theories, and applications and is reported by the person conducting the research. Primary research can be considered an active form of research because the researcher is actually conducting the research for the purpose of creating new knowledge. For the purposes of your speech, you may utilize two basic categories of primary research: surveys and interviews.

The first type of primary research you might conduct is a survey. A survey is a collection of facts, figures, or opinions gathered from participants used to indicate how everyone within a target group may respond. Maybe you’re going to be speaking before a board of education about its plans to build a new library, so you create a survey and distribute it to all your neighbors seeking their feedback on the project. During your speech, you could then discuss your survey and the results you found.

Depending on the amount of time you have and the funding available, there are a number of different ways you could survey people. The most expensive method of surveying is sending surveys through the postal system. Unfortunately, most people do not respond to surveys they receive through the mail, so the number of completed surveys you get back tends to be very low (often under 20 percent).

To make surveying cheaper, many people prefer to use the Internet or to approach people face-to-face and ask them to participate. Internet surveying can be very useful and cheap, but you’ll still have the same problem mail surveys do—getting people to fill out your survey. Face-to-face surveying, on the other hand, is time consuming but generally results in a higher number of completed surveys.

Ultimately, when determining whether you should conduct a survey, Wrench, Thomas-Maddox, Richmond, and McCroskey suggest that you ask yourself four basic questions (Wrench et al., 2008). First, “Do you know what you want to ask?” Surveys, by their very nature, are concrete—once you’ve handed it to one person, you need to hand out the same form to every person to be able to compare results. If you’re not sure what questions need to be asked, then a survey is not appropriate. Second, “Do you really need to collect data?” Often you can find information in textbooks, scholarly articles, magazines, and other places. If the information already exists, then why are you duplicating the information? Third, “Do your participants know the information you want to find out, or if they do know, will they tell you?” One of the biggest mistakes novice survey researchers make is to ask questions that their participants can’t or won’t answer. Asking a young child for her or his parents’ gross income doesn’t make sense, but then neither does asking an adult how many times they’ve been to see a physician in the past ten years. The flip side to this question is, “Will your participants tell you?” If the information could be potentially damaging, people are more likely to either lie on a survey or leave the question blank.

The second type of primary research you might conduct is an interview. An interview is a conversation in which the interviewer asks a series of questions aimed at learning facts, figures, or opinions from one or more respondents. As with a survey, an interviewer generally has a list of prepared questions to ask; but unlike a survey, an interview allows for follow-up questions that can aid in understanding why a respondent gave a certain answer. Sometimes interviews are conducted on a one-on-one basis, but other times interviews are conducted with a larger group, which is commonly referred to as a focus group.

is carried out to discover or revise facts, theories, and applications—similar to primary research—but it is reported by someone not involved in conducting the actual research. Most of what we consider “research” falls into the category of secondary research. If you’ve ever written a paper for one of your classes and had to cite sources, then you’ve conducted secondary research. Secondary research is when you report the results of someone else’s primary research. If you read an academic article about an experiment that a group of researchers conducted and then tell your audience about that study, you are delivering information secondhand to your audience. You as the speaker did not conduct the study, so you are reporting what someone else has written.

One place where secondary research can get people into trouble is when they attempt to use someone else’s secondary research. In a book titled Unleashing the Power of PR: A Contrarian’s Guide to Marketing and Communication, Mark Weiner cites research conducted by the investment firm Veronis Suhler Stevenson Partners (Weiner, 2006). It might be tempting to leave out Weiner’s book and just cite the Veronis Suhler Stevenson Partners’ research instead. While this may be easier, it’s not exactly ethical. Mark Weiner spent time conducting research and locating primary research; when you steal one of his sources, it’s like you’re stealing part of the work he’s done. Your secondary research should still be your research. If you haven’t laid eyes on the original study (e.g., Veronis Suhler Stevenson Partners’ study), you shouldn’t give your audience the impression that you have. An exception to this rule is if you are citing a translation of something originally written in a foreign language—and in that case, you still need to mention that you’re using a translation and not the original.

Aside from the ethics of telling your audience where you got your information, you need to be aware that published sources sometimes make mistakes when citing information, so you could find yourself incorrectly providing information based on a mistake in Weiner’s book. Think of it like the old game of “Telephone,” in which you tell one person a phrase, that person turns to the next person and repeats the phrase, and by the time thirty people have completed the process, the final phrase doesn’t remotely resemble the original. When people pass information along without verifying it themselves, there is always an increased likelihood of error.

Weiner, M. (2006). Unleashing the power of PR: A contrarian’s guide to marketing and communication. San Francisco, CA: Jossey-Bass and the International Association of Business Communicators.

scholarly investigation into a topic in order to discover, revise, or report facts, theories, and applications

a truth that is arrived at through the scientific process

a proposed explanation for a phenomenon that can be tested scientifically

carried out to discover or revise facts, theories, and applications and is reported by the person conducting the research

research carried out to discover or revise facts, theories, and applications—similar to primary research—but it is reported by someone not involved in conducting the actual research